My interest in photography arises from an urge for self-expression. It is the
product of my research into the search for identity. In reflection on my own
experience of life, I am moved to ask questions about the meaning of identity.
I ask, for example, how identity is expressed in our lives. I wish to explore the
relationship between the individual presenting his / her personality and the
society to which he / she presents it. As a being in society, I wish to use images
as a means of conveying impressions as I receive them, and open them to
discussion.

I do not see photography as a means of describing objective truth. Rather, I see
subjectivity in selecting and constructing the content. I recognize that photography
always offers the possibility of multiple interpretations. The subjectivity of creating
construction combined with a recognizable reality tempts the viewer to forget the
mediating function of photography. One is tempted to believe that one sees the
situation itself with the help of the picture. But a photograph is a product of artistic
fiction.

For me, the most fascinating capacity of photography is its capacity to portray a
moment as a picture and to capture an essence of the event. My photograpic
series are composed of different fragments of reality put in relation to each other.
While photographing, I watch people very closely. I choose situations in which
I believe people are described in an honest way; but the fact remains that I do
choose the scenes I photograph, and what kind of message I construct by
combining these images. I feel a responsibility to the people I wish to portray,
and therefore I work very carefully, choosing the situations in which I photograph,
and selecting the pictures which I show in public.

My choice of subjects is a reflection of my own biography. In the years 1985 - 1995
I have concentrated mainly on three projects: Deutsche Volksfeste, Colossal Youth
and Reflecting Oneself. 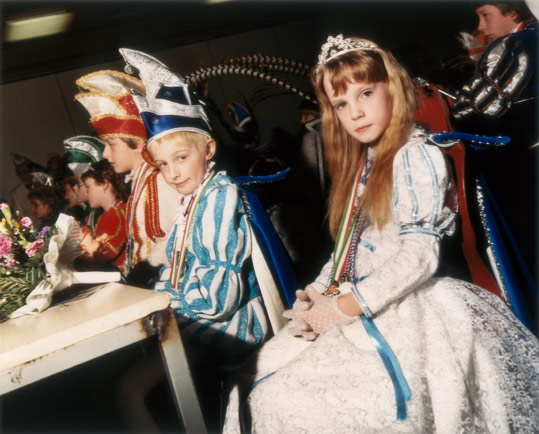 In the years 1985 - 1986 I began Deutsche Volksfeste for my own interest and
continued it from 1989 - 1991 as a job for STERN Magazine. I photographed
at festivals and traditional celebrations in various regions of West Germany. In
Deutsche Volksfeste, in reminiscence of my own childhood, I looked at children
in situations in which I could become emotionally involved. My primary interest
was to show how children are utilized by their parents as signifiers of social status.
Their behaviour towards adults was controlled by their parents. The children were
tidily dressed for the festivity and the parents were proud of the appearance of
their children. I am aware of a conflict here between my work as a photographer,
and an individuals right to privacy. While I did my job for STERN magazine from
1989, I concentrated on showing how the individual presents himself to society.
This was based on the idea of holding a mirror up to society.

While reflecting on my own youth, the cycle Colossal Youth developed from 1988 - 1990
in Essen. The philosophy of life held by the people I photographed during this time reminded
me in a way of my own philosophy as a young person in the '70s, that of not seeing in society
a chance for one`s future. The protest of not conforming to society`s conventions, as they
were at that time, is an issue I felt also existed amongst the people I met while photographing
Colossal Youth.

But as this work developed, I became aware of my own subjective interpretation of the situation;
I could no longer compare the lifestyle of those represented in Colossal Youth with that of my
own youth. Rather, I recognized that I looked at their lifestyle with the eyes of an adult. My
youth had been more than 10 years prior. Out of this tension between sympathy and distance
I developed my photographic message.

Both works deal with the question of the identity of the individual within a community. The people
in both groups are looking for social contacts. They develop habits and demonstrate their outlook
on life. One can say that the individuals and families from Deutsche Volksfeste adhere to a set of
rules created for them by previous generations and help to convey those rules and codes of
behaviour to future generations. Simply said, the people from Colossal Youth oppose the principles
and manners given to them by their upbringing. They create a way of living that demonstrates their
rejection of social values. In living out this rejection, they create other rules and codes of behaviour. 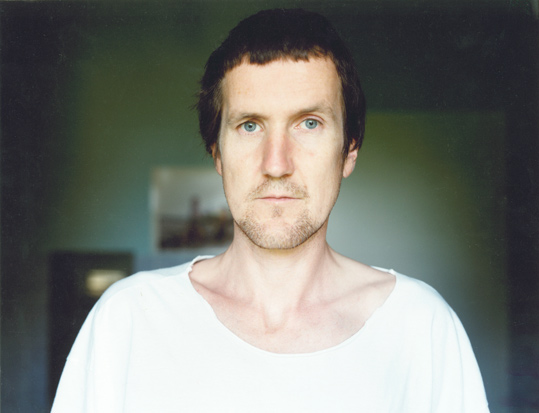 After this intensive analysis of other peoples way of life I wanted to explore
my own identity.

Reflecting Oneself developed mainly in the years 1990 - 1995 in our home
in Essen. I chose for this limitation of space in order to sensitize myself to the
impressions I receive from my surroundings. The work was inspired in part by
the interaction of familiar living spaces and changing light and shadow. Growing
flowers illustrate the passage of time. My intention was to reflect upon my frame
of mind and to creatively deal with it. I started to photograph the step-by-step
changing of my feelings. I wanted to make selfportraits which resemble my gaze
into a mirror. I wanted to fix a familiar sight.

Between the impulse in my mind to make a photograph of my present state of
mind, and the actual photographic result, stands the photographic method,
which creates a new situation. I install the camera in front of myself. In my mind
I hold a posture. Believing that this pose is true to my original feeling, I make
a photograph. I photograph my face without seeing it. Later, when I see the
photographs, I make a careful selection.

I document a process of self reflection. My motivation was to portray my
sensitive and thoughtful mood. Out of this process I was determined to
develop my creative abilities.

All three works are connected to the question of the individuality of a human
being. Out of the experience I have had so far, I see identity as a construction.
It is formed in reaction to one`s milieu and to oneself. The culture to which I
belong has dad a formative influence on my way of thinking. One is taught
from childhood to judge oneself and others.

Deutsche Volksfeste and Colossal Youth are reflections on my own childhood
and adolescence. In these works I make myself sensitive to situations in life
to which I feel emotionally connected. And although I have unavoidably
objectified my subjects, I hope that my genuine interest in them leads to a
positive result. I became aware of my observing and constructing position
as a photographer and reflected with Reflecting Oneself my own identity.
This exploration of my own person let the desire grow to express myself
and to communicate intensive with other people.
The book project Colonies of Obstinacy was commissioned by the Stiftung
Bauhaus, Dessau. I realized it in the years 1996 - 1997. It gives an insight
into the changed living situation of the people in former GDR industrial area
of Bitterfeld - Wolfen.

In my current work The Good Eart I follow the cycle of the seasons reflecting
on the human relationship to nature. I portray a 75 and 78 year old retired
couple, who together with a friend of 75 years have farmed organically
( biodynamic) for 20 years. I portray the organic process of life and work,
striving to give a positive insight into getting old. 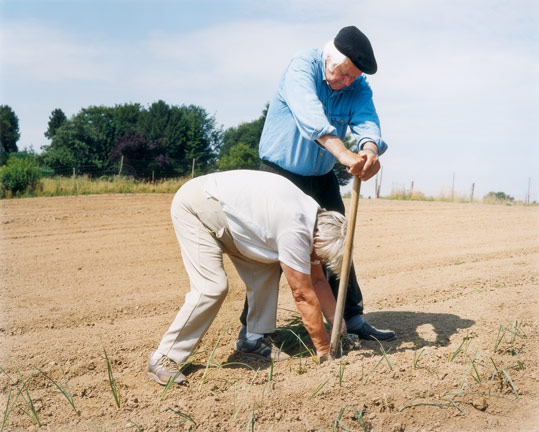 My understanding of the photographic process of creating pictures lets me
compare it with the production of a theatrical play. In a theatrical play the
human characters are played by actors. In photography the picture takes
the position of the actor. Photography fascinates us with its ambiguity
of content. The presentation of a photographically fixed picture results in
decoding by the viewer.